For lunch on Thursday we went to Panera again and this time I tried the meatballs and mashed potatoes. They were very satisfying. After work, I had a few Skype calls scheduled.

On Friday, the internet was not down again at work. We ordered lunch from a restaurant called Mrkva. I have visited it a few times in the Stari Grad for their delicious ćevapčići but this time we ordered burek. I ordered the sirnica, which is filled with cottage cheese instead of meat. At 1pm, I was dismissed early. It had finally stopped raining and the sun had come out. Once I got home, I decided to use my extra time to fix the toilet. It wasn’t broken but it had been running constantly for the past couple of days. I had planned to check out some live music at the [Underground](www.facebook.com/undergroundclubsarajevo) but by the time 9pm came around, I was tired from my long week and stayed in.

|Bosnia and Herzegovina was scheduled to play their second World Cup game against Nigeria at midnight local time on Saturday. This time, I made sure to take a nap during the afternoon so that I could stay awake during the game. An hour before the game, I turned on my TV and was pleasantly surprised to find Harry Potter and the Order of the Phoenix with Bosnian subtitles. The movie made me feel at home and I forgot that I was halfway around the world, 6-9 hours ahead of all of my friends. After the movie was over, I switched to the sports channel and settled in, ready to support my temporary home country. 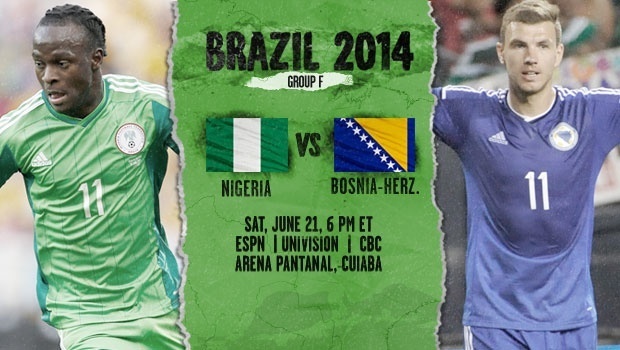 After losing their first game to Argentina, BiH had a lot resting on the outcome of their Nigeria match. image source

After twenty minutes of back and forth action, the Dragons had a wonderful play. They fed the ball to Džeko who blew past the defenders and chipped it over the Nigerian goalie. 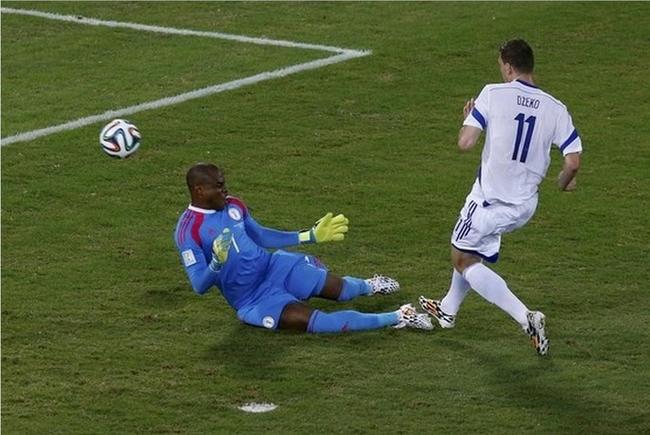 Unfortunately, the referee incorrectly called Džeko offsides, nullifying the goal. In a sport where referee error can strongly affect the outcome, it is surprising that instant replay has not yet been adopted. image source 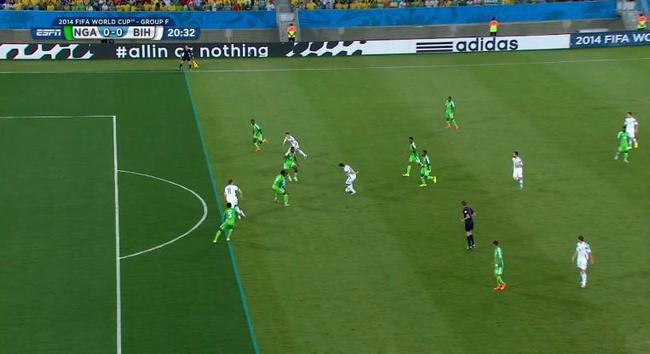 Less than ten minutes later, the Nigerians struck back. Odemwingie was waiting in the Bosnian box and received a great ball from his teammate. He easily finished and put the Nigerians ahead 1-0. image source 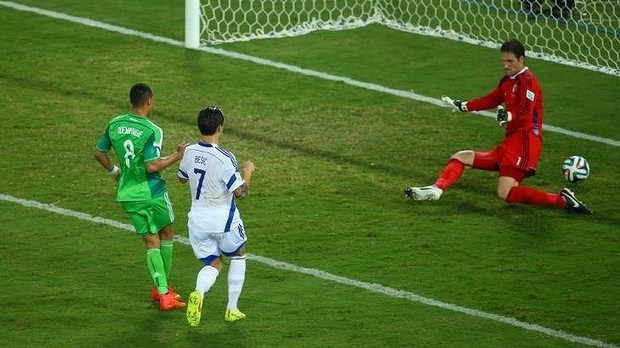 Throughout the rest of the game, the players continued to hammer both goalies. BiH had a particularly close call on a corner that was headed just over the goal. image source 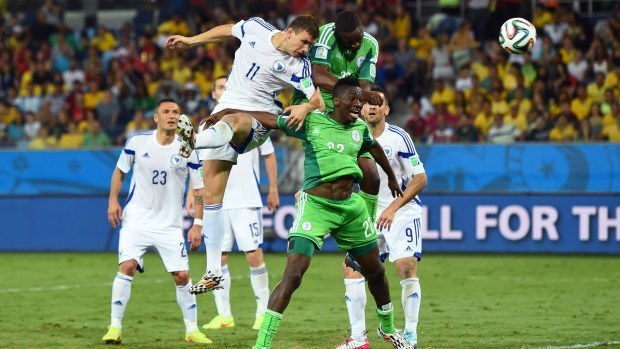 As the second half wore on, the players were getting exhausted and the frequency of fouls increased. Mikel received a yellow card for essentially “booty-bumping” Pjanić off course during a promising Bosnian counter-attack. image source 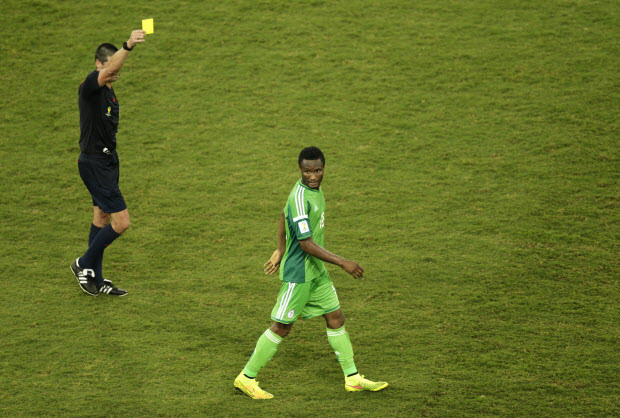 Without any more goals, the game ended 1-0 Nigeria and the Bosnian players and fans were devastated. After two losses, they would not be able to advance to the next round of the tournament. image source 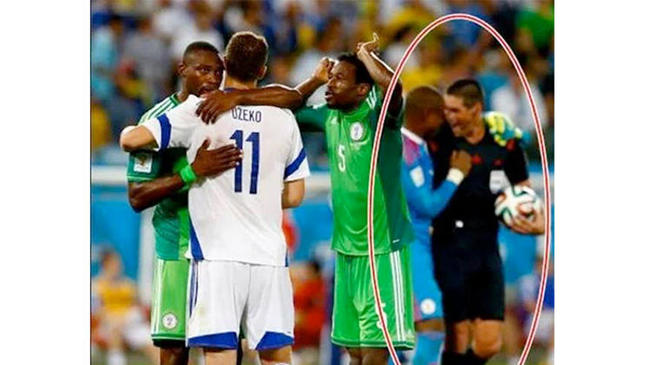 There was backlash from the Bosnian team and fans after seeing a picture released from Getty Images showing the New Zealand referee celebrating the win with the Nigerian team. The Bosnian fans have created a petition with 23,000 signatures to remove the referee from the World Cup. Bosnian striker Edin Dzeko, who scored the goal that was called back, said, “We are going home and we are sad because of that but this referee should be going home too. He changed the result and he changed the game. “ Whether the ref is just excited to be a part of this international tournament or if he had bias towards the Nigerians remains to be seen.
image source

I had planned to go grocery shopping on Sunday because I was running low on Honey Nut Cheerios, which I eat for breakfast every morning. I had completely forgotten that the Sarajevo Grand Prix was happening that day. The finish line was right across the river from my apartment and my walk to the store followed part of the route. 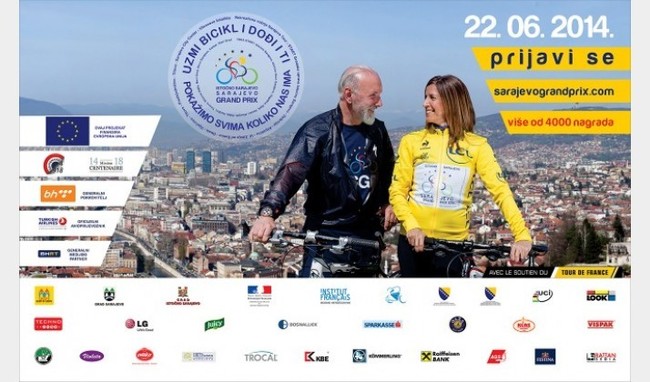 The Sarajevo Grand Prix is the first event that commemorates the 100 year anniversary of the assassination of Franz Ferdinand, which took place in Sarajevo on June 28, 1914. The rest of the month will be full of museum exhibits, community events, and historical celebrations for the shot the started World War One. ”[The] race is the only event marking the start of the ‘Great War’ to be jointly organised by Bosnia’s two ethnic-based regions.“ (from Rueters) image source 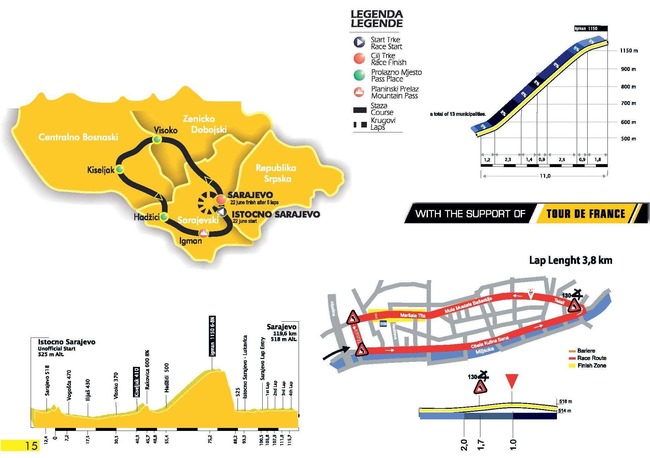 After completing the majority of the 150km race, the competitors would return to Sarajevo to do five final laps around the city. There were police officers lining the course, making sure cars stayed off of the streets that were part of the race. image source 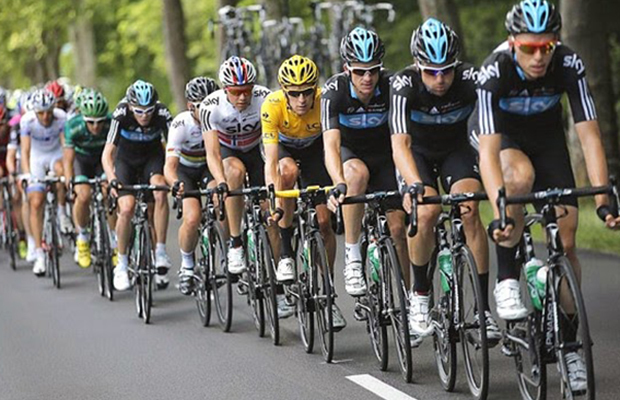 Every couple of minutes, a police vehicle would speed by with sirens blaring, followed by a line of cyclists. After these were the follow cars which included the press and the team cars carrying spare bikes and wheels. image source

In between the groups of cyclists were recreational bikers. The citizens of Sarajevo had come out in great numbers to participate in the last leg of the race. They wore yellow event shirts and rode along happily. This public participation was encouraged and the event organizers were glad to see the amount of young children and people that attended. They had achieved their goal of unifying Bosnians in an event that was above ethnicity, religion, and background. 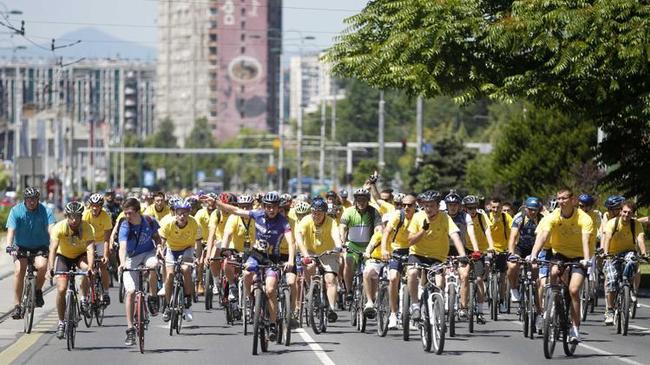 The finish line was lined with spectators eager to see the outcome of the race. 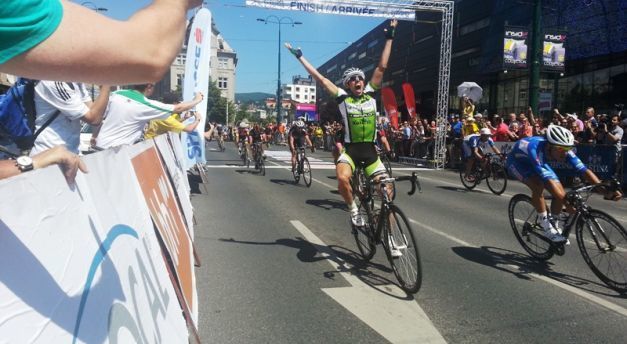 On my way back from the grocery store I passed the awards ceremony, which was being held in front of the Parlamentarna skupština Bosne i Hercegovine (Parliamentary Assembly of Bosnia and Herzegovina). It was a hot day and my bag was full of perishibles so I went home and watched the ceremony on my TV. image source 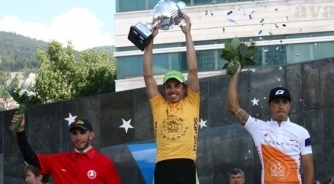 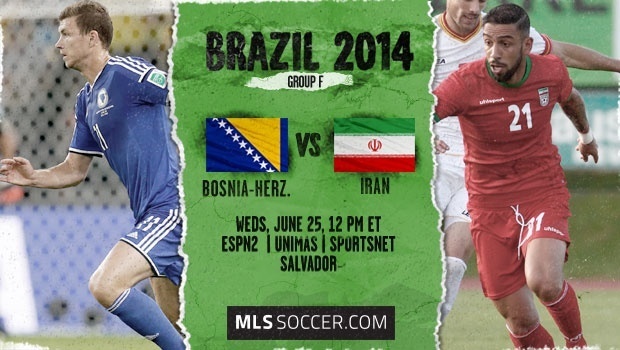 Bosnia and Herzegovina was scheduled to play their third World Cup game on Wednesday against Iran. Although their two loses guaranteed they would not be advancing, that did not affect the Bosnian team’s spirit. Before the game Džeko was quoted saying "We know that we are not going into the next round, but we will try to do our best in the next game.”

Iran still had a chance to advance. If Argentina beat Nigeria and Iran beat BiH, then both Iran and Nigeria would have the same points and it would come down to a goal difference. Bosnia starts the game fiercely with a shot on goal by Džeko within the first five minutes. Iran has a solid defense, a reason for their low goal tally in the tournament, but the Dragons continue to press the Lions. 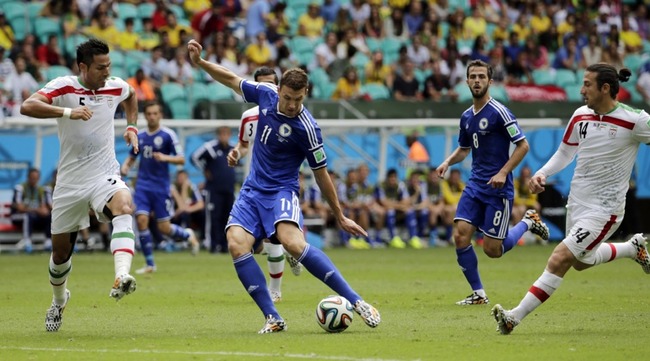 As the defenders are closing in on Džeko, he fires a low powerful shot, narrowly threading the Iranians, bouncing off the inside of the post and putting the Bosnians in the lead for the first time in the World Cup.
image source

The goal does not phase the Iranians and they pick up the pace, adding a striker and making the Bosnians a little nervous. The first half ends without any more goals but not for lack of effort. Iran has much more at stake than BiH but both teams are playing hard. 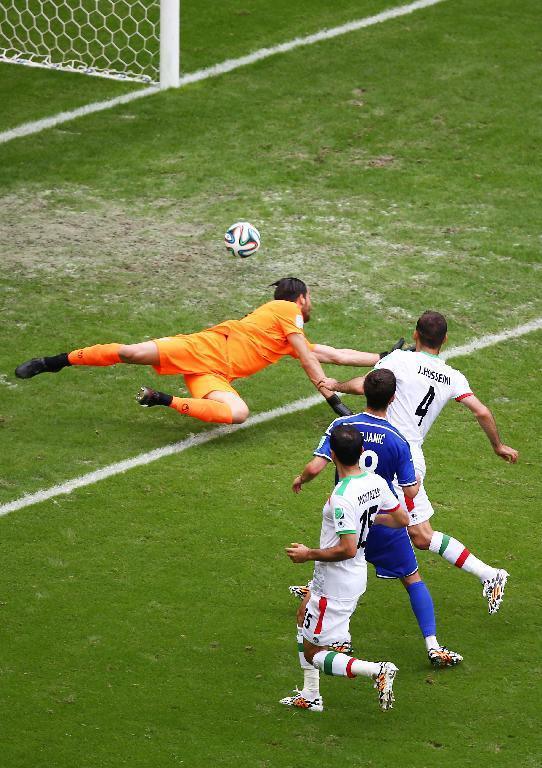 Only fifteen minutes after the second half starts, Pjanić makes a perfectly timed run into the Iranian box and recieves a great ball from Sušić to score one more for the Dragons.
image source

At 80 minutes, Ghoochannejhad (Gucci) gets a promising shot deflected for a corner. 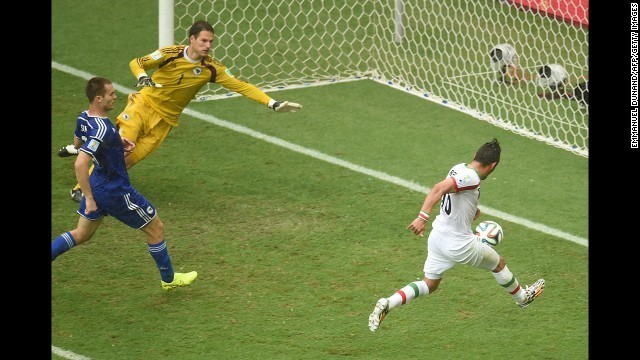 When the corner fails to be properly cleared, Gucci is ready and waiting, tapping it in to put Iran on the scoreboard.
image source

This only wakes up the Dragons and they return, less than five minutes later, with another goal. 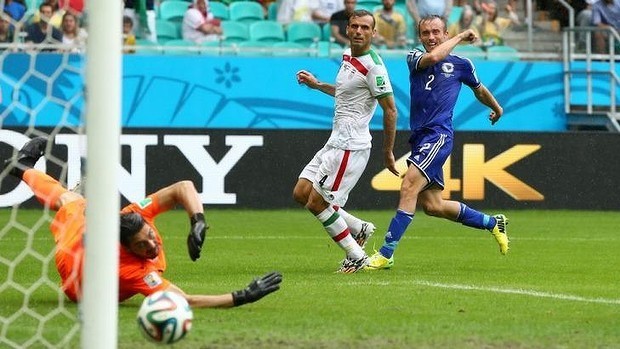 Vršajević places a low hard shot in the corner, just out of the goalkeepers reach to restore Bosnia’s two-point lead.
image source

With their first win in the World Cup, the Bosnians can return home knowing they did not disappoint their fans. There will always be a “what if” surrounding the officiating in the Nigeria game but the win solidifies their place in World Cup history. 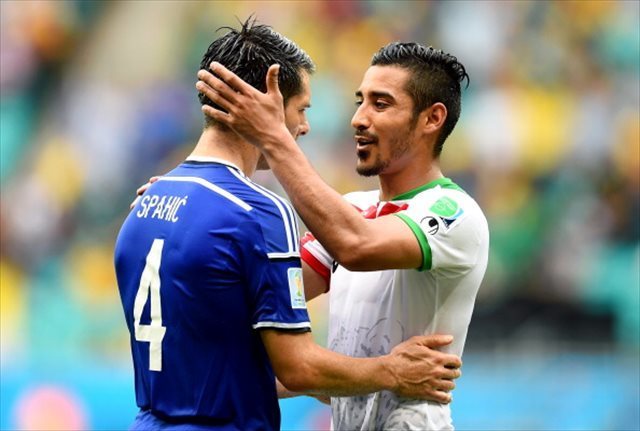 The teams respected each other and the outcome of the game. Iranian coach Queiroz said, “As a team, Bosnia were the best we came up against. They were on another level to us.” image source

Ramadan will begin this Saturday, June 28, which coincides with the 100 year anniversay of the assasination of Franz Ferdinand in Sarajevo. Ramadan is a muslim holiday, the ninth month in the Islamic calander. For the entire month, muslims abstain from eating, drinking, and smoking from sunrise to sunset while attending Although I have heard of Ramadan, I have never experienced it in a city with a high muslim population. According to [The Balkan Chronicle](http://balkanchronicle.com/index.php/arts-a-culture/arts/culture/2388-ramadan-in-sarajevo-bosnia-of-east-and-west) “Bosnia is the best place to "be” muslim in Europe, at least during Ramadan, because when you are on bosnian streets or in café you will have feeling that you are in some European and Middle East city at the same time.“ While this may be true, I feel that Sarajevo always has this mix of East and West.

I have been back in Pennsylvania for about a week, and I look back fondly on the many unique experiences I had this summer abroad. When travelling around the Balkans, I was surprised by how welcoming the people were. The locals wanted to... Continue →